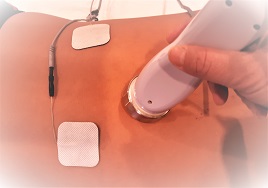 When you experience pain such as migrant, tennis elbow, frozen shoulder, muscle sprain, arthritis, what do you usually do without second thought.

80 % of people choose to  take Advil and Tylenol (Non Steroid Anti Inflammatory Drug, NSAID).  The pain is to some extent relieved.   But after 4 to 8 hours, the same pain is creeping back and getting worse. You take more pills and more pills or go to your doctor. What will your doctor do? He/she will Prescribe you some stronger pain relief medicine such as tramadol, Tylenol with Codeine. If this happened before 2004 and you had Arthritis, your doctor would prefer to prescribe Vioxx produced by Merk pharmaceutical. Voixx is Cox-2 inhibitor and was marketed as the better alternative in choice of non-steroid anti-inflammatory drugs due to fewer instances of digestive tract problem.

After 10 month of taking these medication, one day you find you have gastro bleeding because you have taking too much Aspirin,   liver problem caused by Acetaminophen (Tylenol), cardiovascular problem, heart attack caused by Vioxx.   In 2004, Merk had to withdraw vioxx and discontinue the drug due to severe side effect. With estimates of Americans affected by Vioxx ranging from 88,000 to 139,000, and about 30 to 40 percent of those numbers likely resulting in death. NSAID side effects include stomach upset, heartburn, and ulcers. Kidney injury, easy bruising or bleeding. According to British Journal of General Practice, NSAIDs are responsible for 30% of hospital admissions due to adverse drug reaction, mainly due to bleeding, heart attack, stroke, and renal damage. Since we know there are adverse drug reaction of NSAID, have you ever thought of trying some physical way for pain relief? Such as physiotherapy, Acupuncture and Moxibustion.

Using acupuncture to relieve pain by balancing the body’s natural energy pathways. The flow of energy is known as qi.  Acupuncturists place tiny, and very thin needles into your acupoint. The theory of pain relief using Acupuncture is that the insertion of the needle at acupoint causes the body to release serotonin, a “feel good” chemical that eases pain. Acupuncture helped relieve pain associated with osteoarthritis, migraines, and various  locations of chronic pain.

Physiotherapy using ultrasound, electric wave and break done inflammatory tissue.  Chiropractor help to align the spine so that the spine will not pinch the nerve.

Remember, pain is the body’s signal that something is wrong. It may be temporary, such as a strained muscle. But pain can also mean you have a serious health problem that needs a professional medical evaluation. Don’t hesitate to seek out a healthcare provider to diagnose the source of your pain, and then discuss some natural options for treating it. Physical treatment don’t have side effect like gastro bleeding, liver or cardiovascular.